Colour and balance are key when presenting dishes. Image Supplied

When it comes to the dining experience, there is much more involved than simply the taste of the food. The shape and colour of the plate, weight of the cutlery, background music and the way food is presented all have a subconscious impact on how pleasurable the dining experience is.

Neil Gow, who is master of gastronomic tourism at culinary arts and hospitality management institute Le Cordon Bleu, says the latest gastrophysics research, food studies and trends reveal that the food on your plate accounts for only half of what makes a positive dining experience. He says it is also important to consider how the diner will eat the dish, which items will be eaten first and in what order, how they will be combined on the fork and the environment in which it is consumed. “Neurogastronomy tells us how the brain processes sensory information relating to flavour, for example what areas of the brain light up, while gastrophyics is focused on understanding and measuring the factors that influence a good or bad dining experience – aka a scientific study of those factors that influence the multi-sensory experience while tasting food and drink,” he says.

Presentation is important to Brent Savage from Bentley Bar and Restaurant

Many Australian chefs are embracing the concept, including Grant King from Gowings Bar & Grill and Brent Savage from Bentley Bar & Restaurant in Sydney, and Vue De Monde’s Shannon Bennett in Melbourne.

“Dining is about creating a positive hedonistic experience and hopefully a lasting memory where fun is an important element,” Gow says. “In recent times, we have seen a shift away from a singular focus on just the signature dish to one that encapsulates and socialises the process that created it. I believe a multi-sensory approach to dining allows a chef more avenues to explore as they offer these experiences through a creative process that tells a story.”

Due to our physiology, as well as our cultural heritage, the triggers as to whether we believe something will be enjoyable or not is heavily influenced by visual cues. “For example, genetically we would typically be repulsed by blue food; we need to colour butter to make it yellow,” Gow says. “We also eat with our eyes. There is a famous experiment where wine connoisseurs were completely misled by colouring white wine red. On tasting it, they automatically started attributing red wine characteristics to it. Red is also commonly associated with sweet flavours, while green is sour and therefore will set up a flavour anticipation.”

How food is presented can also influence how much we are prepared to pay for it. “Is it artistically presented, in the centre or off to the side?” Gow asks. “Consider how much food and its orientation on the plate. The shape and colour of the plate it is served on can also be a significant factor. For example, in one experiment a strawberry-flavoured mousse served on a white plate was perceived as being 15 per cent more intense, 10 per cent sweeter and was liked 10 per cent more than the same mousse served on a black plate.”

The size of the portion relative to the size of the plate can also be relevant. “It has been shown that individuals eating off a small plate will consume less, as is the case when the bowl is held,” Gow says. “The upside of this is that chefs can manipulate these visual cues to create innovative and memorable dishes, for example Swiss chef Denis Martin’s invisible soup, called rien – which means ‘nothing’ – or Heston Blumenthal’s orange and beetroot jelly.”

Touch also plays a subtle role. Studies have also shown that food eaten from a heavier bowl or spoon is perceived to be more pleasant and of higher quality than the same food consumed with a lighter weight utensil. “It is not only weight but the material and surface of the cutlery that can be important,” Gow says. “Copper has been found to enhance the saltiness of food while a rough or smooth finish can cause a morphing or intensification of flavours.”

When it comes to ambience, the style of music can have an effect and influence on people’s behaviour and their sense of expectation. “There was an experiment from the ‘90s where playing music made respondents think of France, which influenced their decision to purchase French wine,” Gow says. “As well as the volume, the choice of music is important. Liking the music can make the food taste sweeter, while the reverse can make it bitter. The pace of the music can also alter the pace at which a meal is consumed. There is also interesting research showing that sound can be used to modify mouthfeel (oral-somatosensory) and creaminess perception as well.”

Shannon Bennett was just fourteen-years-old when he got his first taste of neurogastronomy and gastrophysics when he started working at McDonalds. “That is when I realised the connection between smell and the taste combination of salt, fat and sugar,” says the acclaimed head chef of Vue De Monde in Melbourne’s Rialto Tower and MasterChef Australia guest judge. “These taste cravings are triggered by certain smells and are most probably the most highly addictive combination of substances on the planet. All we do now as chefs is play with the balance of these obi nations and add other tastes into the recipe.”

Bennett agrees presentation is crucial to enhance the taste, smell and flavour of a dish. His marron tail recipe, for example, is recommended to be accompanied by a Nespresso Lungo Leggaro coffee because of its flavour association. “Colour relates to our emotions and expectations of what a dish will taste like,” he says. “If you prepare the marron perfectly by blanching the flesh in the shell first, then refreshing the flesh, you preserve the carotene in the surface and a beautiful red colour is achieved. Diners then see this colour and know they are receiving a delicacy. Balance this rich marron flesh with lemon aspen and there is both a balance in presentation and flavour that satisfies the senses.”

Bennett uses fine Christofle cutlery at Vue de monde. “One design is the original design of the first cutlery imported into Australia in around 1860,” he says. “It is silver, heavy, has texture and makes you think. It even in certain circumstances could make you anxious, knowing that this cutlery is expensive and aspirational. This all creates expectations in the brain of what is to come.”

Bennett also likes to create an ambience that cannot be created at home, with unique artwork and ambitious design. “Most importantly the theatre of the kitchen and the wait staff takes centre stage,” he says. “We also have someone curate music for us every season and menu change.” 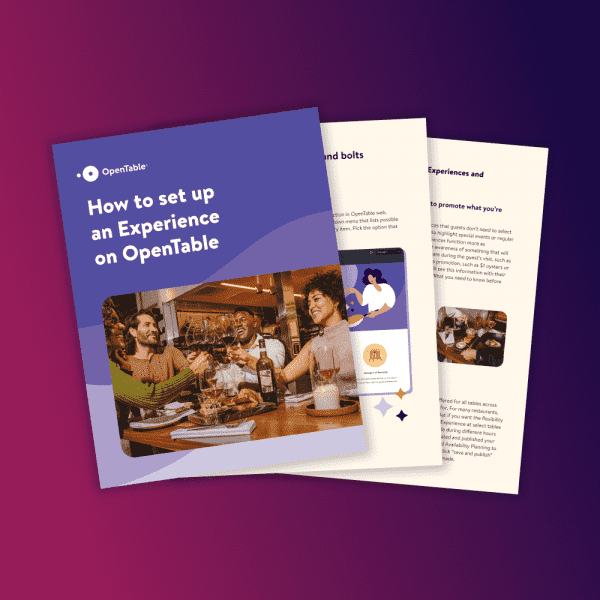 5 easy steps to set up an Experience on OpenTable

Labelled as THE trade exhibition for the foodservice, hospitality and retail industry, Fine Food Australia is the event showcase of…

OpenTable ResourcesHospitalityMore than the food: Top tricks to creating a pleasurable dining experience